We were recently approached by Kerry Reid from the Marketing and Communications team at The University of Hertfordshire, who was looking for a selection of team building activities that would last for around 2 hours and could be run as part of their away day in two weeks’ time. 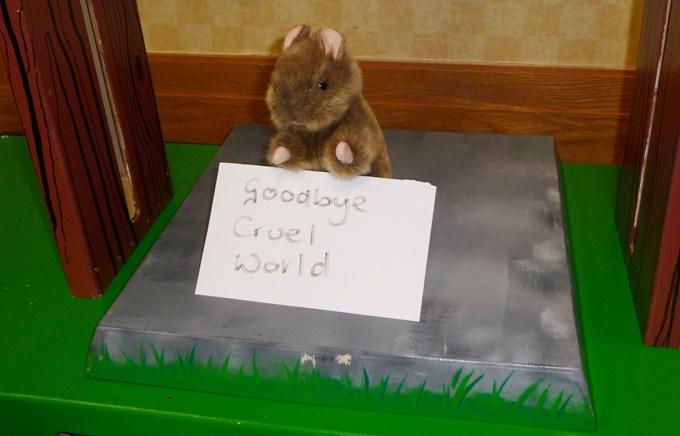 The department had recently gone through a lot of changes which saw some new faces joining the team, as well as people moving to new areas, and so it was really important that the event would help to develop new relationships within the department, as well as provide a morale boost and plenty of fun for the 60 people taking part!

After discussing a few different options it was decided that Rat Trap would be the perfect indoor team building activity.  Rat Trap is a fantastic event that is based loosely on the classic board game “Mouse Trap”.  The overall objective is for the whole group (working in smaller sub teams) to construct a giant mechanism made up of several different contraptions that will, when triggered, start a chain reaction that will culminate in squashing our resident fluffy rat! 🙂

With all of the pre-event planning and preparation complete, the event crew arrived at The Fielder Centre bright and early on event day to ensure there was plenty of time to set up.  At 10am, Toby (our enthusiastic presenter for the day) introduced the activity and set the challenge – TRAP THE RAT!

Like rats up a drainpipe (excuse the pun!), the teams dived into the challenge head first and immediately started to build the various contraptions, making fantastic progress from the very start.

By 11.45 the teams were ready to start placing the completed contraptions in the correct order so that they would create a giant chain reaction when the first one was triggered.  With our rat starting to look rather nervous underneath the precariously suspended 1 ton weight, the giant ‘Rat Trap’ was almost ready to be set in motion and the excitement was building.

With a deafening countdown from all the participants, the ‘Rat Trap’ was triggered!  First the “Spinner” then the “Whirler”, closely followed by the “Dropper” – the reaction was gaining momentum.  The tension was building as contraption after contraption worked perfectly, each one triggering the next in the sequence.

As the reaction neared “the Pecker”, its final stop en route to squashing our now trembling rat, the participants were waiting with baited breath – our rat was starting to sweat – even the crew were staring wide eyed!  Finally, the “Pecker” was triggered releasing the giant weight, and squashing our friendly rat to rapturous applause and plenty of whooping!

The event was absolutely fantastic and all of the teams were superb.  We even had to throw in a few extra tasks for them to tackle as they were doing so well!

Note – No rats were harmed during this event! 🙂 Our resident fluffy rat is safe and well, and looking forward to the next Rat Trap event (we think!).