When we were approached and asked to provide a choice of high energy team building activities for one of the Worlds leading mobile communications companies, we had lots of ideas that we thought would be perfect.

When we were then told that the group had a diverse range of personalities, were up for anything, and thrived on a bit of friendly competition, there was only really one option left!

There were going to be approximately 100 people taking part, and the team building activity itself was going to be run for 2 hours on the morning of day two of the event.  Day one would be taken up with meetings, followed by an evening meal and plenty of drinks so we were expecting a few sore heads when everyone arrived for the event!

We suggested Beat The Clock because it is a super high energy team building activity which is made up of over 150 different challenges and tasks of various genres.  This makes it perfect for large groups with various personality types, as there is literally something for everyone.  Some people might excel at mental tasks, some may prefer creative challenges, and some might dominate when it comes to technical problems.

The overall aim of Beat The Clock is for teams to score as many points as possible by completing as many tasks and challenges as possible.  They will of course be up against the clock with a giant countdown timer displayed at the front of the room so everyone knows where they are up to.

On the day of the event, our team arrived bright and early to set up the event room with the various equipment and event related paraphernalia, ready for the participants to arrive at 10am sharp.  As people started to enter the room, the antics from the night before were obviously taking their toll on some, and there were more than a few sore heads in the room!

Once everyone had arrived and had taken their seats at the team tables, our presenter introduced the activity and got everyone warmed up with a quick energiser.  By now people were starting to wake up and the excitement was building.  The team boxes were placed on the tables and clock started to countdown – the challenge had started! 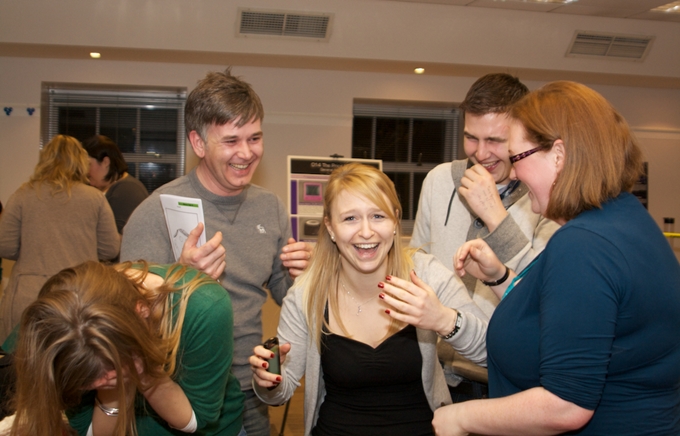 Teams started to tear pages out of their task booklets and find the corresponding challenges which were placed around the venue.  At first they started with the more sedate challenges, easing their way into the activity but just 10 minutes later, all hell had broken loose and Beat The Clock was in full swing!

As we looked around the room we had some people sitting at their tables completing paper based puzzles, some were joining forces with other teams to create a huge Mexican wave, and others were even choreographing a “company cheer” complete with pom poms!  The variety of challenges in this event never ceases to amaze me.

As the time ticked away the teams were getting even more manic, trying to complete as many tasks as possible and our marshals were in high demand.  As the final two minutes appeared on the clock, teams went in to overdrive and the room was buzzing as the final score sheets were handed in to our scorers.  The final ten seconds started to countdown before the final buzzer sounded to huge cheers from all the participants.

After a quick wrap up from our presenter, the participants made their way to the restaurant whilst we added up the scores and cleared away the carnage that had been left behind, ready for the all-important results session and prize giving after everyone had enjoyed a spot of well-earned lunch!