Well it’s has been non-stop in the White Rhino office since returning from a very pleasant break over Christmas and New Year. One of our first events of 2015 was for 3M which we thought we would share with you.

The team from 3M approached us early in December 2014 looking for some team building activities to run alongside their January company conference. There would be approximately 40 people taking part and the event was being held in Oxford. The activity itself needed to be fun and engaging, but also allow them to integrate the key messages from their conference.

Their key messages were:

The event that stood out as being the perfect option was a GPS Urban Explorer Treasure Hunt. This event is completely interactive, would get delegates out of the conference room and exploring Oxford first hand, and fit in perfectly with their available 3 hour time slot. 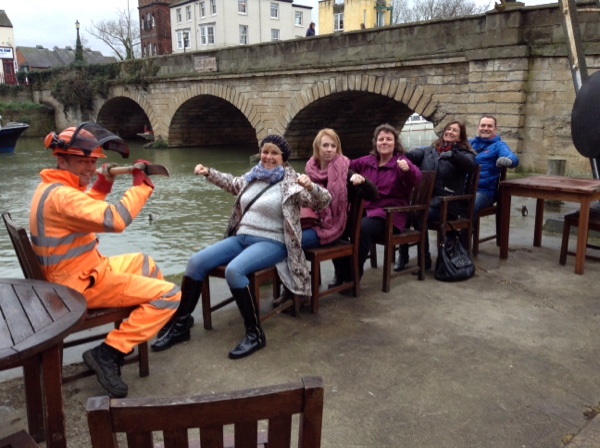 The group was split into 8 teams, each of which was armed with a Samsung Galaxy tablet loaded with the latest GPS Treasure Hunt software and an interactive map of the hunt area (Oxford in this case!). With a whole host of GPS Hotspots to explore, each housing a unique questions, task, or challenge, there would be plenty for the teams to do!

The three key messages from the conference could be easily integrated into the event in the following ways:

During the GPS Urban Explorer Treasure Hunt participants will have to complete various photo and video challenges, clues, and tasks etc. in order to earn maximum points. The more they complete the better chance they have of achieving the ultimate aim – winning the game.

Following the initial briefing, each team was handed their Samsung tablets and needed to devise a winning strategy. What route will they take around the hotspots? Will they prioritise the photo and video challenges (which will earn them more points but take more time to complete), or focus on the other clues and tasks? Once they had a plan, they had to put it into action.

As you would expect there were numerous conference calls and discussion prior to the event to ensure all of the bases were covered and that everything would run smoothly.

On the day itself, Simon was the event manager and delivered the initial briefing and results session perfectly. As soon as teams were kitted out with their tablets and the challenge had been set they disappeared out into Oxford and started to solve the various clues and complete the challenges (all whilst keeping a close eye on their competitors using the interactive map!).

Everyone arrived back at the venue at the designated finish time and handed their tablets in so that the photos, videos, and final scores could be pulled together by our or team and the results could be announced.

With plenty of smiles and anticipation from all of the delegates, Simon closed the event by announcing the results whilst the photos and videos taken by the teams were projected in the background.

GPS Treasure Hunts are the perfect way to get your team out in the fresh air, particularly if you are located close to a town or city. There are a variety of different treasure hunt formats to choose from and they can all be easily tailored to suit your event and key business messages.