Last Thursday (27.11.14) we were invited to the re-launch of Oakley Hall Hotel near Basingstoke, following its £4m renovation.

We thought that this would be a great opportunity to have a look around the new meeting space and bedrooms, and the invitation also mentioned that there was going to be food and champagne on offer – so naturally we weren’t going to miss it! 🙂

A little bit of Oakley Hall’s fascinating past…

Oakley Hall Hotel has a rather distinguished and fascinating past, that has brought it to being the luxury 4 star hotel it is today.

It was built in 1795 and the author Jane Austen lived in the nearby village of Steventon until she was 25, and as a friend of the Bramston family – the then owners – she was a frequent visitor to Oakley Hall and it is mentioned fondly in Austen’s letters to her sister Cassandra.

In 1940, Oakley Hall became the new home of Hillsea College which relocated from Portsmouth (some of the original books from the college are still located in the Library), before finally being converted into a hotel, conference, and events venue. The hotel is independent and privately owned by The Fogarty Group – a local family business – and this shows. Quite different to many large chains of hotels!

Oakley Hall Hotel is certainly an impressive building and is reached via a long sweeping driveway. Upon arrival we were warmly greeted by friendly staff behind reception (genuinely friendly, not forced “I’ve been told to be friendly” friendly!), who directed us through to the main bar area.  There were around 140 people in attendance for the launch, including guest speaker Richard E Grant, and there was certainly a buzz in the room as guests mingled and admired the surroundings of the newly refurbished public areas.

What is immediately apparent is that the refurbishment of Oakley Hall Hotel has not been done half heartedly. The attention to detail and level of finish throughout the venue is simply superb and has created a modern venue which has retained all of its original character and charm. The ambience is relaxed and welcoming and not in the slightest bit stuffy! 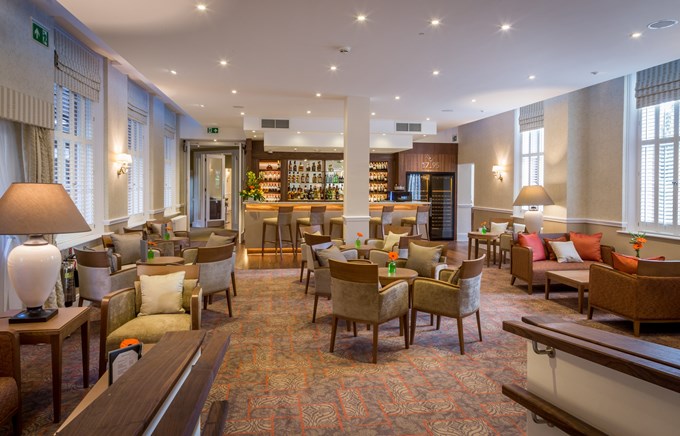 After the official opening, we were treated to a personal guided tour of the venue – where we were able to see the various meeting spaces and bedrooms on offer.  As with the hotel’s public areas, the event space and bedrooms have also been well thought out and finished to a very high standard.

As part of the refurbishment, Oakley Hall Hotel has gained 29 new bedrooms within the main house, all of which have fantastic views of the surrounding countryside. All of the new bedrooms are generous in size and really well equipped, and even the fussiest of delegates would be more than happy with the entry level Deluxe Rooms. The original bedrooms are situated in the converted Courtyard (former stables we think!) and are only 4 years old themselves, meaning that they are also of a very high standard. The Courtyard is an attractive and quiet area of the hotel but with all the 4 star facilities.

With a total of 50 bedrooms, and a meeting capacity of around 100 delegates (or up to 300 for conferences and dinners in the permanent marquee), Oakley Hall Hotel offers fantastic facilities to anyone looking for a small to large sized event venue in the Surrey/Hampshire area.  Extensive grounds (over 300 acres!) and a permanent marquee also mean that Oakley Hall Hotel is also a perfect team building event venue. The food that we tasted was very good and many of the vegetables are grown in the hotel’s own Kitchen Garden or sourced locally, wherever possible.

All in all (in case you hadn’t already guessed!), we were really impressed with Oakley Hall Hotel and would have no hesitation in recommending it to clients looking for a venue for their next team building event or corporate away day.